I can’t believe it’s over a month since I went for a complimentary microblading session at Aura with Meg! I had heard about microblading but wasn’t too clued up on exactly what it was all about and was thrilled to be able to experience it when Aura Skincare Clinic & Nail Bar offered me a complimentary session.

When I tell people I’ve had microblading done, the first question I generally get is how is microblading different from permanent make-up? Meg who did my eyebrows has a great explanation:

Microblading is a lot more shallow than old school permanent make-up, so it is instead a semi-permanent tattoo and will last 12 to 18 months before you will need to have your next touch up done. It also looks a lot more natural because it involves creating individual hairline strokes into the skin as opposed to the thick “block” look that permanent make-up leaves you with.

I have black eyebrows and I think part of the reason why I haven’t really put much effort into doing them up over the years is because they are dark and I didn’t really think that they needed to be filled in. Well, after having microblading done, I have experienced first-hand what a difference it makes if your eyebrows are on fleek! (Below is a “before” pic when I was waiting for the anaesthetic cream to kick in.) 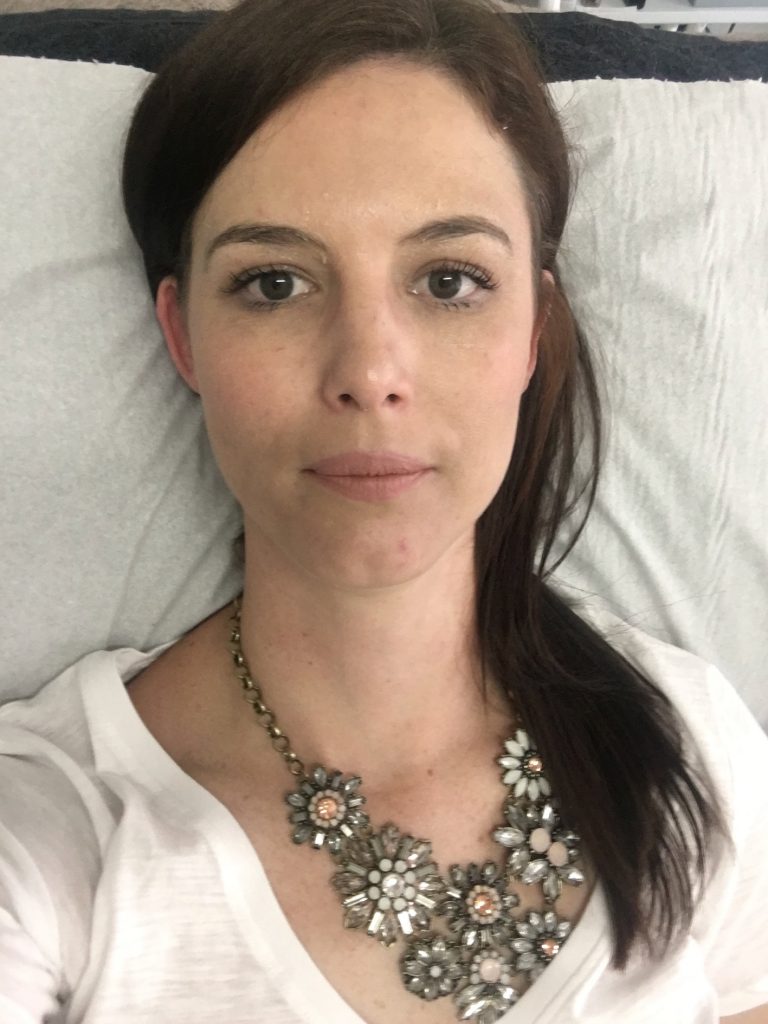 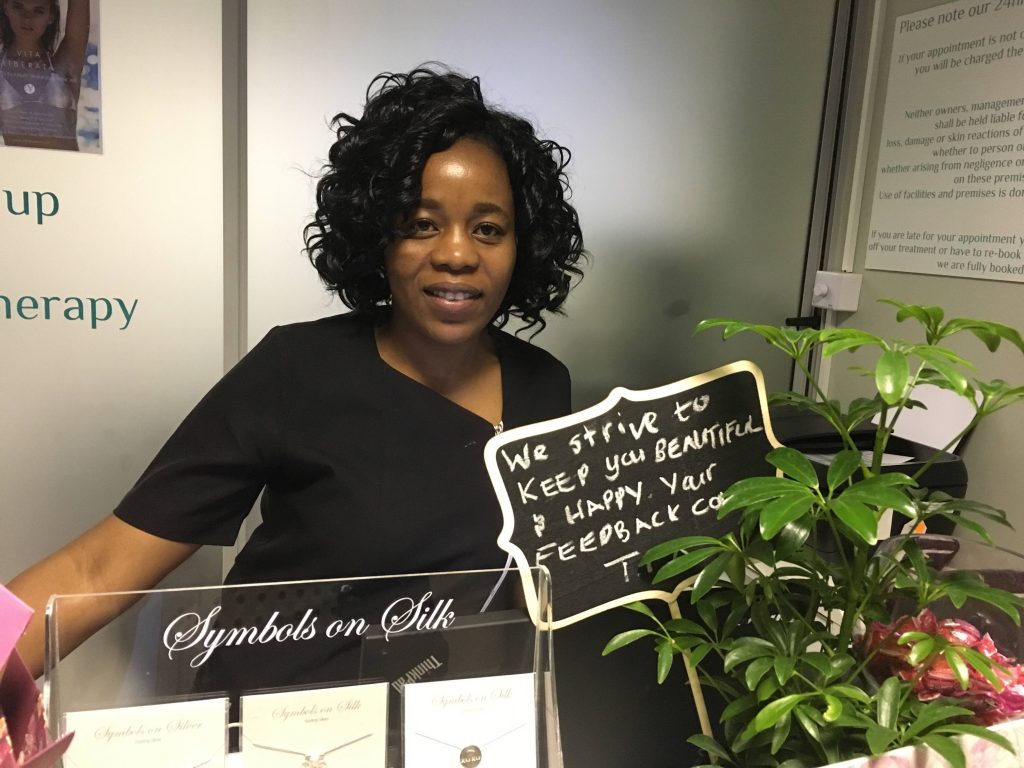 Aura Skincare Clinic is nestled in Parkhurst along 6th street and once you walk inside the front door, you feel like you are far away from the bustling streets of Jozi. I was really impressed by the preparation the staff did before my appointment – Meg made sure I was aware that I couldn’t have any Vitamin B, coffee, or Omega oils on the day of my appointment – and the staff were absolutely amazing when I was there for my appointment.

Meg took me through the microblading process before we started and explained everything that would happen during the appointment. After I completed a new client info sheet, she then asked me some questions about my skin so that she had a better idea of what she was working with. It’s so important that any therapist takes a you through the steps of any type of therapy/procedure so that you know what to expect, and so that they know your skin and how to approach and treat it. 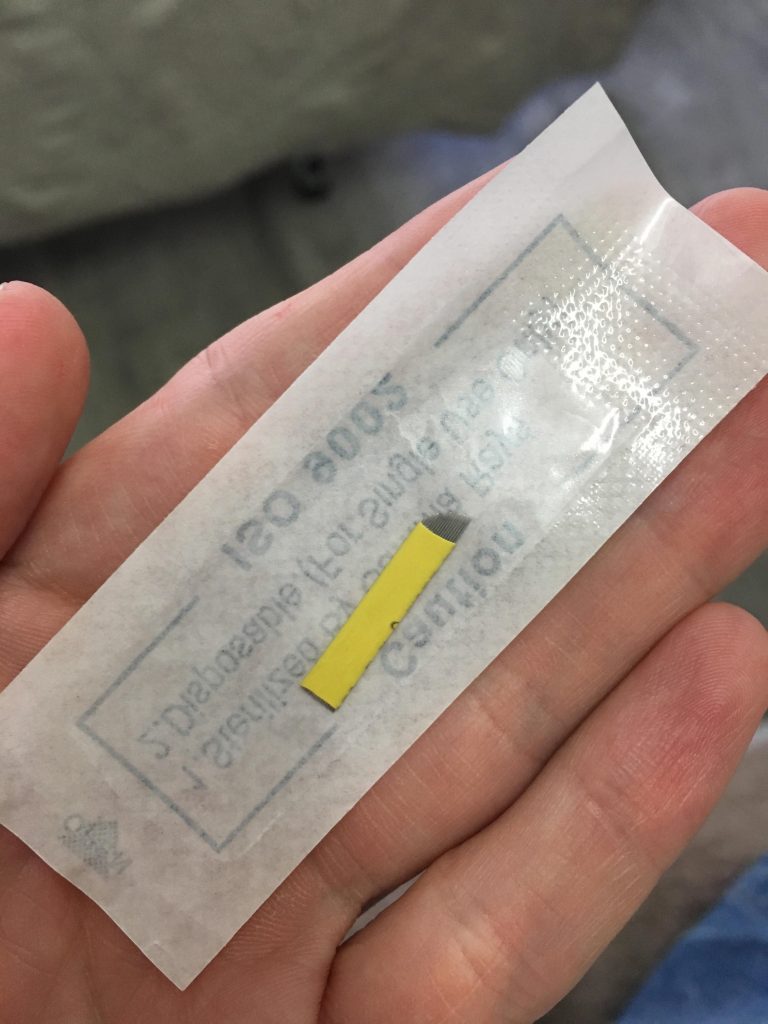 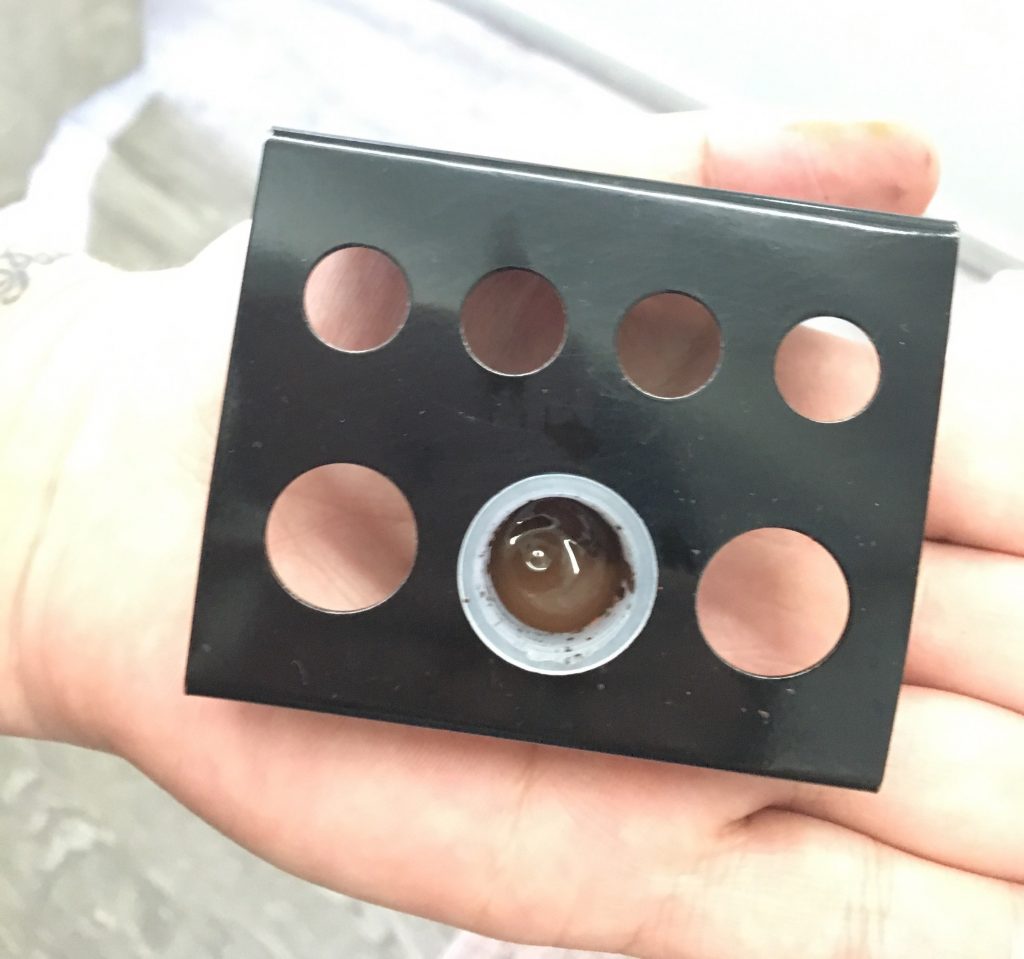 Meg chose the colour she was going to use on my eyebrows and showed me the microblading needles that attach to the pen that she was going to use. I wasn’t scared at all but instead giddy with excitement at the thought of seeing what I would look like once we were done. She asked questions about the shape and thickness of my eyebrows before she marked them up so that she had a better idea of what I was looking for. She let me check the shape after she had marked them to make sure I was happy and then she applied anaesthetic cream on my eyebrows and I lay down and got comfy. After a few minutes, the cream kicked in and Meg began. 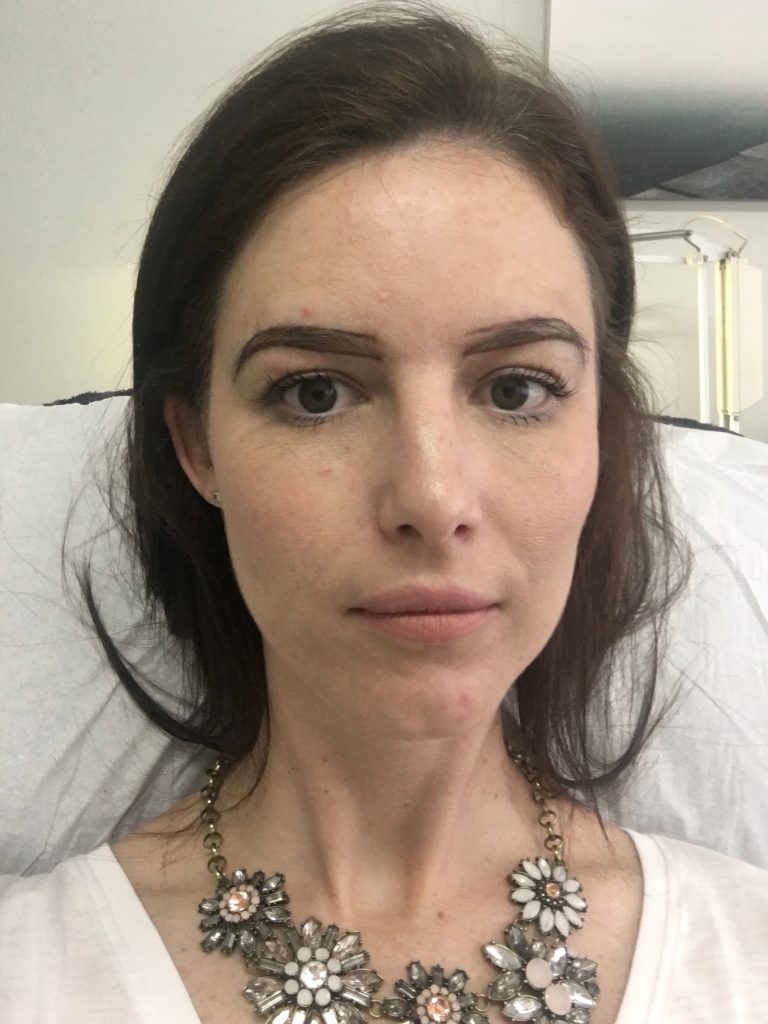 I have a pretty high pain threshold and a number of tattoos that I enjoyed getting done, so I wasn’t too worried about the pain that I might feel during the procedure. When Meg started it was more uncomfortable than painful, but I was able to handle it. When she was working on my right eyebrow, I sneezed after every hairline that she drew. So we had to keep stopping so that I could sneeze. That isn’t uncommon during microblading, so if you need to sneeze, rather tell the person doing it for you. 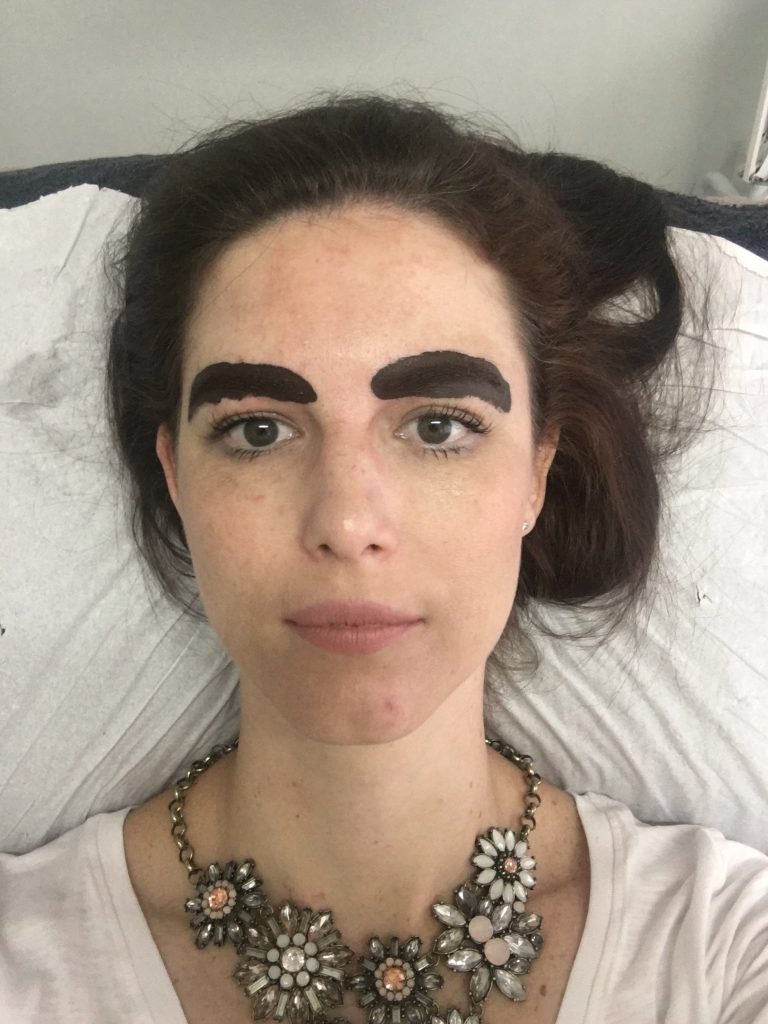 My eyebrows became sensitive during the process, so she put some extra anaesthetic cream on them. Don’t be afraid to ask for some more anaesthetic cream if you are struggling. They also bled a tiny bit which Meg cleaned up for me. When we were done she put some pigment on them and I got to lie down and relax a bit more until she came back in later and cleaned them up for me. That was when the big reveal happened and I was gobsmacked by how much face changed. My new eyebrows really made such a difference! 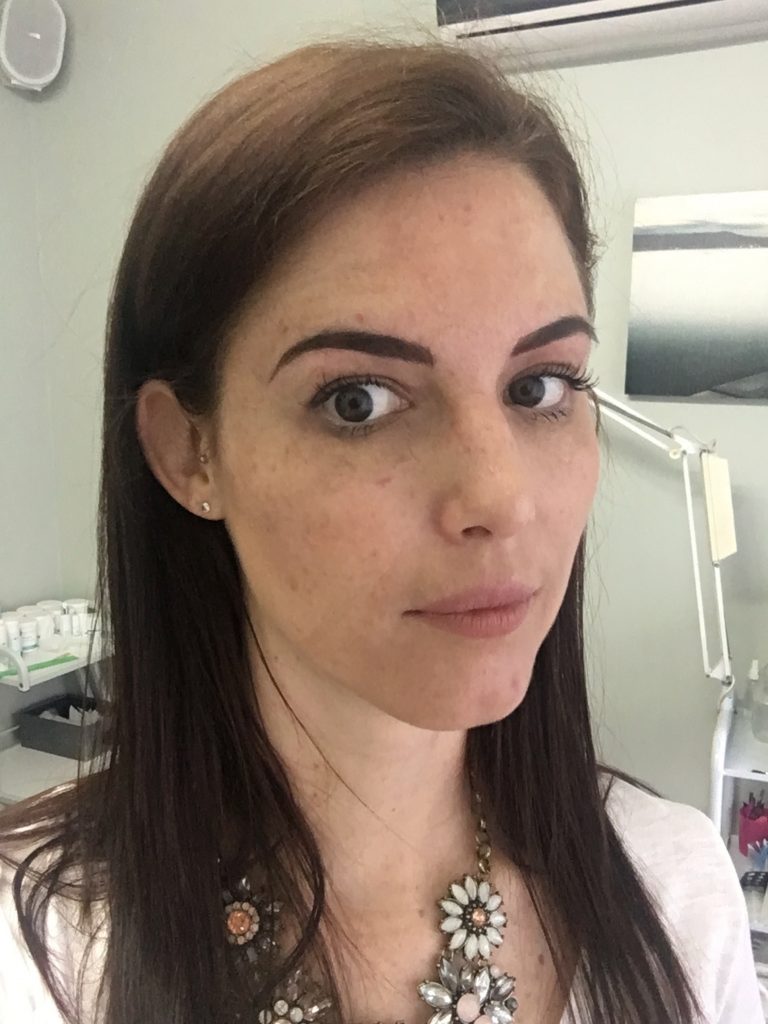 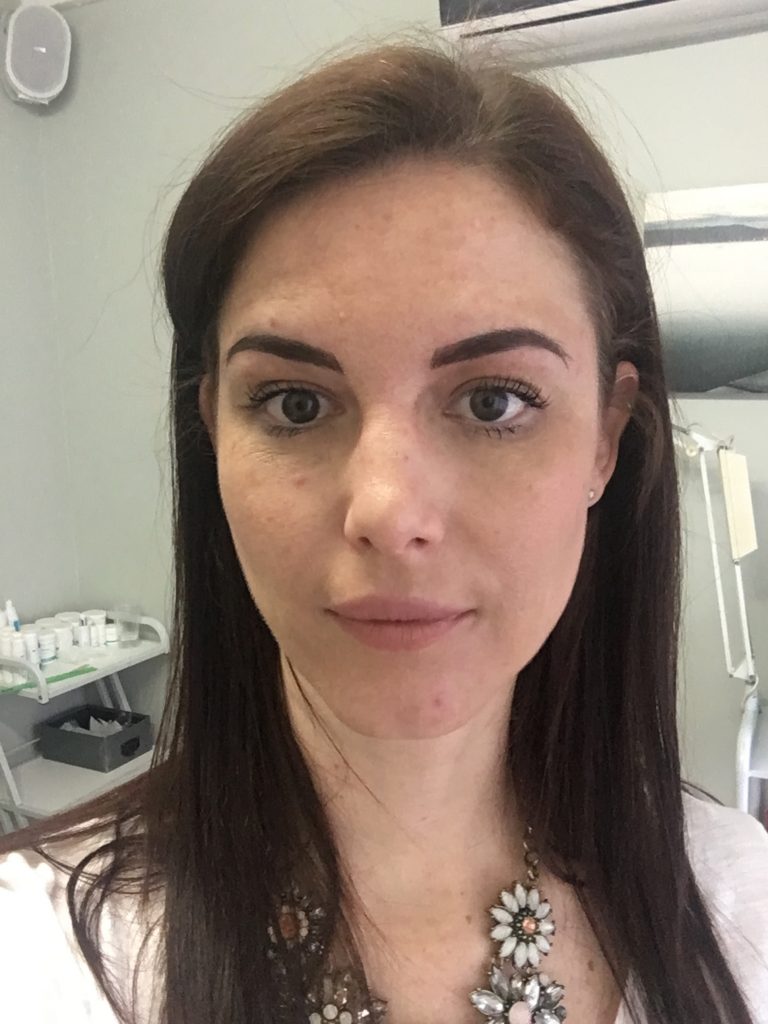 My eyebrows were pretty sensitive after the treatment, especially when I moved them up and down, but again the feeling wasn’t unbearable. Meg sent me home with some coconut oil and instructions on how to look after my brows. The big thing you have to keep in mind is don’t scratch them, tug at them, wipe them too vigorously with a towel, or apply anything but coconut oil over them (from 4 days post treatment).

When the treatment is complete your eyebrows will be very dark. It’s important not to panic because they will fade in time by at least 60 to 70%. I actually loved my dark eyebrows and am sad that they faded a bit.

From day 1 post treatment I’ve had people come up to me and compliment me on my bold eyebrows and how my face now looks more defined. Even when I put some BB cream and mascara on for the weekend when I don’t want to put in too much effort, my face looks a million times better because my eyebrows are done.

My eyebrows still look great so it’s definitely worth a session which may seem pricey at first, but trust me the results are really worth it. Below is a picture I took 2 weeks back. I am only wearing BB cream and mascara and you can see how defined my brows still look. 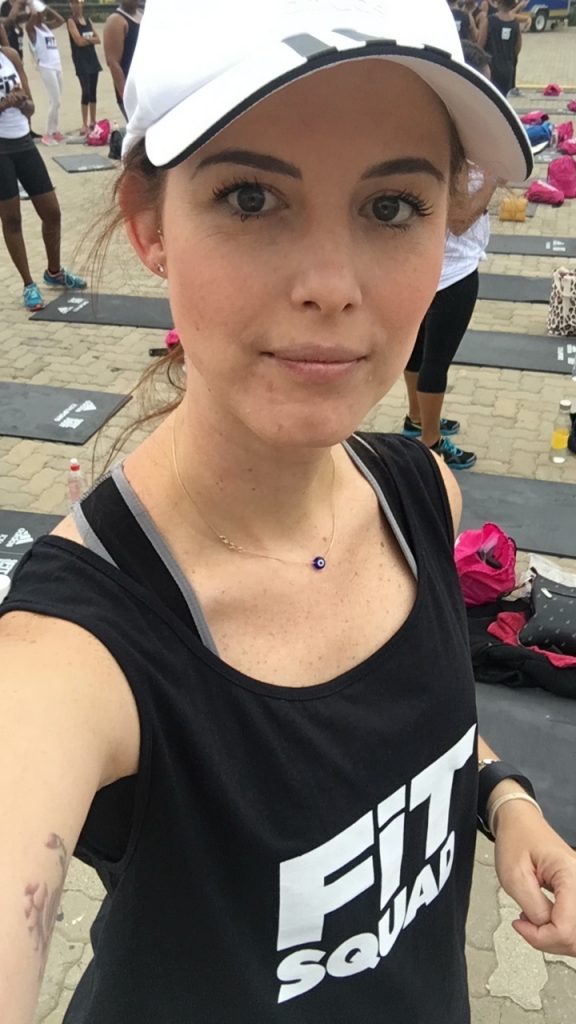 How long does a treatment take?

My treatment went seamlessly and we were done in no time. Generally a microblading is booked for 2.5 hours at Aura. The actual treatment only takes about 30 to 40 minutes, but the rest of the time is spent waiting for the anesthetic to start working (about 20 minutes), drawing on the brows and getting them exactly right so that you love them before the treatment starts, and then a pigment mask is applied after the mask (which is left on for another 20 minutes). Book your eyebrows for a time when you don’t have any parties / events / appointments straight after your microblading because you won’t be able to put any makeup over them once the treatment is done.

What should you avoid doing after having microblading done?

How long does it last?

It will last anywhere between 12 to 18 months.

When should you go for a touch up?

You should have your touch up 6 weeks after your first appointment. You don’t want to do it any sooner as the skin will not yet have completed its healing process and the end result may only be fully visible at the end of the full 6 weeks.

Who should avoid having microblading done?

If you are pregnant you should avoid microblading because the treatment uses anaesthetic. People who have wounds that heal slowly are also advised not to have the treatment, and if you are taking any medications that thin your blood, this will cause a lot of bleeding and will affect the absorption of the pigment.

How much does it cost?

At Aura, microblading costs R2 500 for the first appointment and then R1000 for your touch up 6 weeks later.

So what is the fuss all about? Microblading really is a pretty awesome treatment with fantastic results. I can highly recommend having your microblading done at Aura Skincare, and ask for Meg. She is an absolute gem! I will definitely be making a booking with her for my touch up.

Thank you Aura for the fabulous treatments and experience. 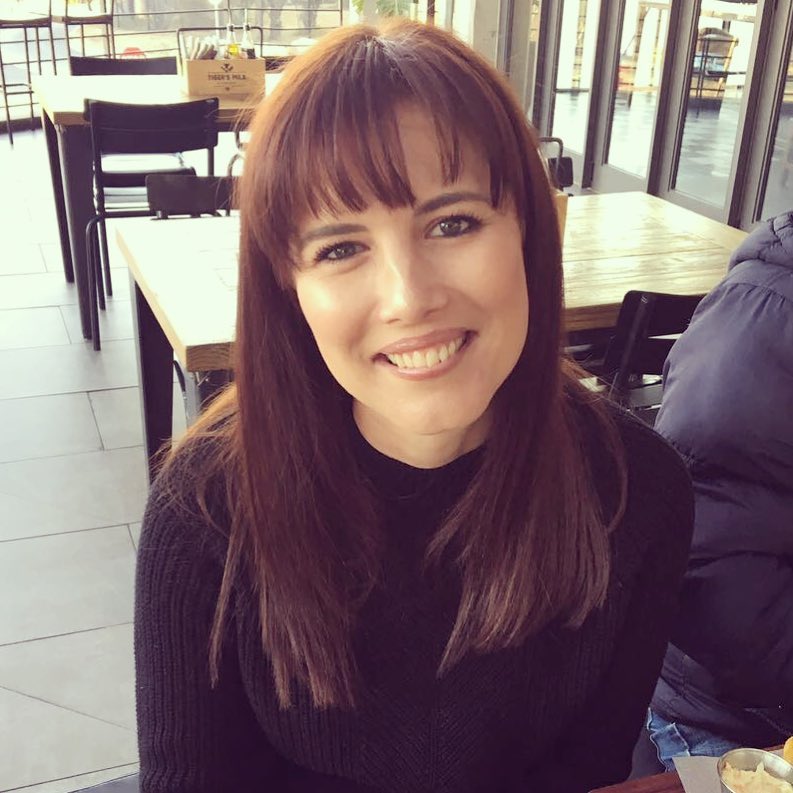